French block translations have been updated for both Scratch and Snap!.

A bug was fixed for Snap!

Digital input data was not being reported correctly when using Snap!. 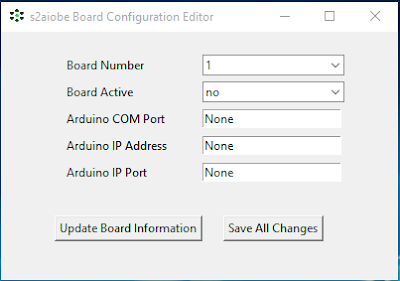 This release includes a tkinter based graphical board configuration editor. Documentation for the editor may be found on the wiki here.

If you are using an older version of the program, you will need to create a new routing map using the editor.
Posted by Mr. Ys Lab Notes No comments:

Simultaneously Control, Monitor and Interconnect Up to 10 Arduinos With s2aiomulti 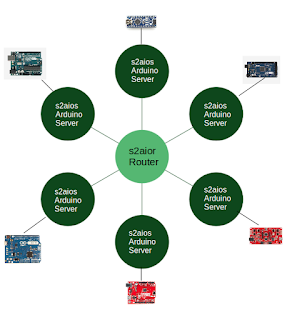 I have just released a new package called s2aiomulti, that allows you to control and monitor multiple Arduino boards from a single instance of Scratch 2.0 off-line.

Not only can you monitor and control multiple boards individually, you can also pass data from one Arduino to another!

Arduinos can be connected via USB cable or via WiFi (WiFi was tested using a Sparkfun RedBot with WiFly module).

This is a bug fix release for a Windows specific issue. The timer resolution for Windows is larger than that for Linux or Mac and in some cases causes a lag in data reporting for analog data. Thank you Guido van Rossum for pointing out the timer differences.

In addition, the code has been refactored for better efficiency.

Thanks go to Dave Fisher and Leigh Mathews for help in verifying this release.