The next version of Xi for Arduino is almost ready for release. Releases for BeagleBone Black and Raspberry Pi will follow on.

All features shown in the screen shot below are currently functional with the exception of stepper motor support. I am awaiting delivery of a bipolar stepper motor and Big Easy controller board, and hopefully this will be incorporated into the release in about a week or so. It will probably take me another week to update the documentation. 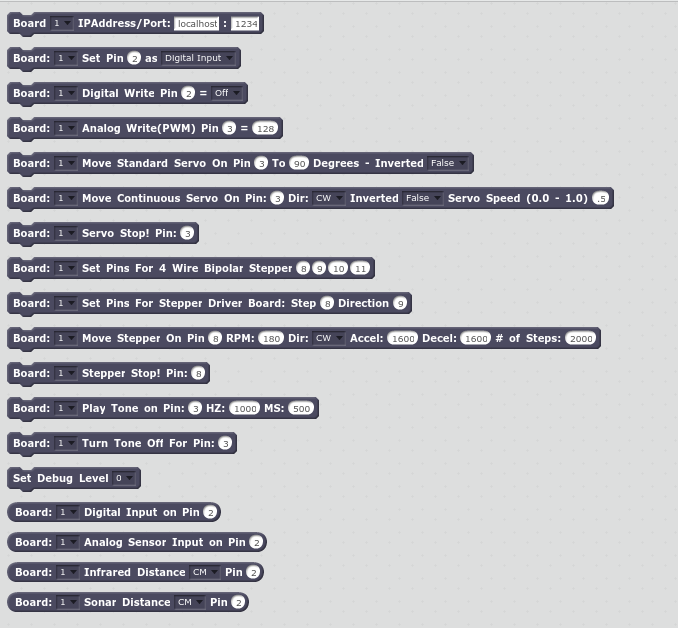 Here is an expanded view of the "Set Pin Mode" block. I have added hints for the pin type needed for the new features. For example, If you wish to add a SONAR device, you would connect the device to a digital input pin. 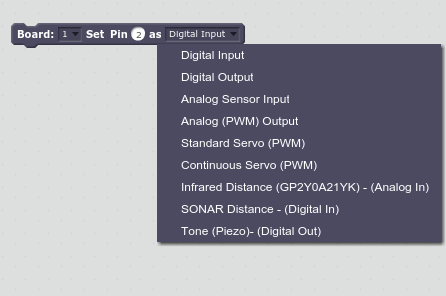 The command block to move a continuous or standard servo contains an "Inverted" field selector. In the case of the continuous servo, if the orientation of the motor provides movement in a direction opposite of what you expect, you can invert the movement. This allows the Direction field to reflect the correct direction of the motor no matter what the orientation. For standard servos, depending upon motor orientation, the angle might be the reverse of what you expected, so here too, the invert field comes in handy.

For distance sensors, both SONAR and Infrared, the reported distance reported can be configured to be either centimeters or inches.

That sums up the current status. If there is a device you really would like to see incorporated in a future release, please let me know. If you have ideas of how to improve the current device support, let me know those as well.

Wish me luck with the steppers!

Thanks to Hsu Jen-Chieh, s2a_fm blocks have been translated to Taiwanese.