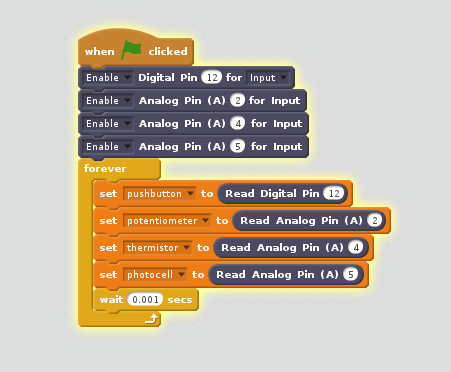 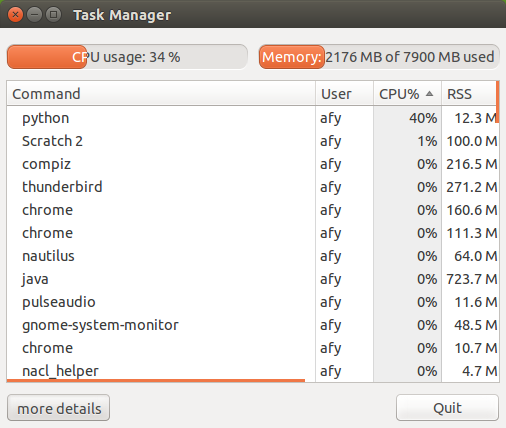 We can see that Scratch is taking up about 1% of the CPU and that s2a_fm is consuming about 40% of the CPU.

These measurements were taken using Ubuntu 15.10 64bit running on an Intel i5-2600k with 8 GB of RAM installed.

Running the same exact Scratch program on a prototype asyncio implementation of s2a_fm,  we get the following results: 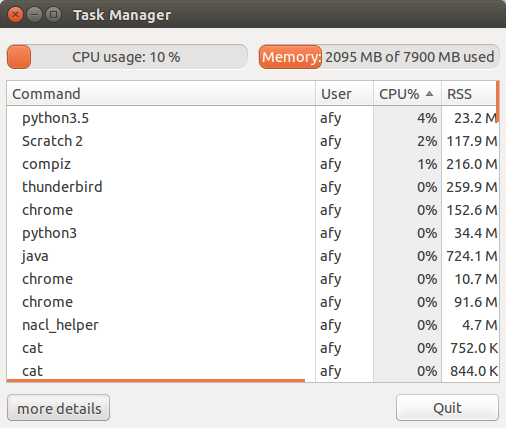 The asyncio version dramatically reduced CPU utilization by a factor of 10! In addition, there appears to be an improvement in responsiveness. For example, when changing the value of the pot, there is less stutter and lag.

Because these results are so promising, I am about to embark on developing the next generation of s2a_fm, to be called s2aio.

Here are some of the design goals for the new version:
Please note that s2aio will require the use of Python 3.5 and will not be compatible with Python 2.7.

To enable the feature when using one of the FirmataPlus sketches, simply call the keep_alive API method. This method has 2 defaulted parameters.

1. Merges in the lastest updates to the SparkFun RedBot experiment files from the Rose-Hulman Institute of Technology.
2. Fixes a bug introduced in v2.3 that prevented specifying the com port as a parameter.
3. Improved shutdown of pymata_iot. It now sends a reset to the Arduino upon exit.
Posted by Mr. Ys Lab Notes No comments:

The v2.3 release introduced a bug that rendered the library unusable for Windows users. Python 3.5 asyncio has a mechanism that allows registration of signals (SIGTERM, etc.), but this mechanism does not provide support for Windows.

As a result, integrated control-c support has been removed from the library and is now the responsibility of the application developer to provide. Examples are provided for both pymata_core and pymata3 APIs here.

If you are having difficulties with version 2.3, I am working on a fix. My efforts to improve the Control-C handling seems to crash on windows.

I am investigating and will report back when I have a fix and release v2.4.

In the meantime, please download version 2.1 which does not exhibit this behavior. The only major difference between version 2.1 and 2.3 is the support for WiFly.

Sorry for the confusion and inconvenience.

Version 2.3 Has Been Released

NOTE
Any applications developed using earlier versions of pymata_aio should be fully compatible with version 2.3 and should not require any modifications.