I have completed the bulk of the coding for razmq and the results are in!

I wanted to share this information now. The code will be published in a short while, after some cleanup and additional testing.

The following screen shots were taken on a Raspberry Pi 3 running the latest Raspbian image, Raspbian Jessie with Pixel.

The first is "quiescent" mode. The pigpio daemon, pigpiod,  the xrdp  daemon and htop  are running.

Starting all the processes that monitor and control the Raspberry RedBot we see the following: 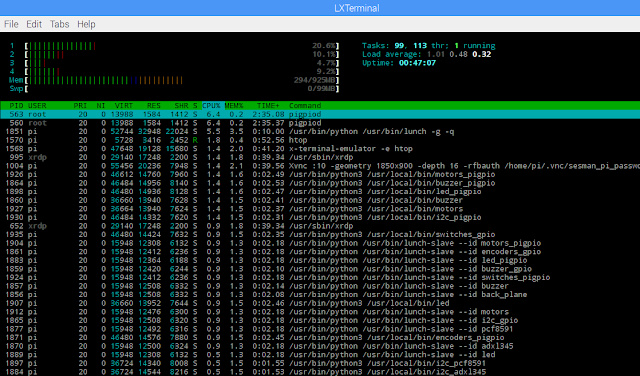 The Accelerometer (ADXL345) and the  3 Line Followers (PCF8591) are continuously streaming data via i2c in this scenario.

Finally, we run the motors at full speed. This causes the encoders to add their streaming information into the mix. The motors at full speed run at 140 RPM. Each encoder sensor generates 192 "ticks" with each wheel revolution. Since this level of resolution was not necessary for the purposes of this project, the number of ticks was throttled  by a factor of 6. So now each wheel revolution is limted to generating 32 "tick" notifications per wheel (but 192 are still being generated). This yields a 1/8 inch or 3.175 mm distance resolution that is reported on the GUI screen. Here are the results when the motors are running full speed and all other sensors and actuators are active: 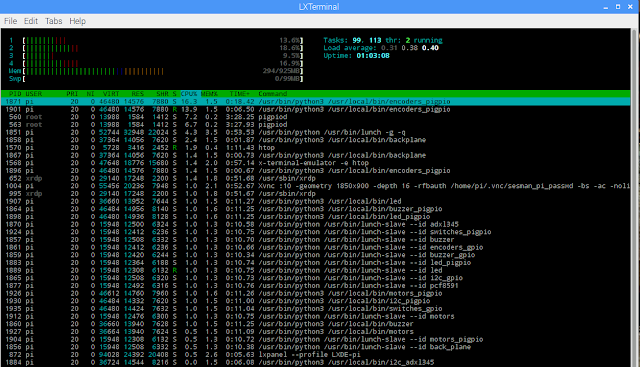 CPU utilization varies from about 16% to 26% and there is no additional memory utilization while the motors are running.

Here is a screen shot of the Kivy based GUI running on my Ubuntu based desktop PC. Let's summarize what is running when the "motor run" numbers were captured:

Some Important Facts About The Framework Used to Create razmq

So What Does This All Mean?

The razmq project was built for a specific set of hardware actuators and sensors. However, the framework is easily adaptable to be used for other projects. New features can easily be added to existing projects and enabled on an already executing system. New projects can be created using a simple and consistent coding pattern.

The next several articles will explain in detail how razmq works and how you can use its framework in your own projects.