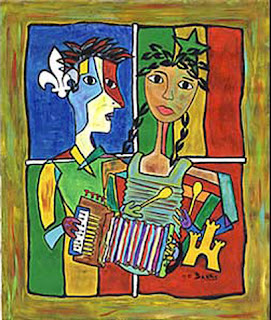 Artwork from http://www.terrancesimien.com/creole-for-kidz/
When looking for a new project to work on, I began to reflect on Xi, a project I created back in the Fall of 2014.

Xi allows a user to control a set of of individual  microcontrollers as if they were a single "megacontroller" using either Scratch or Snap! as a graphical user interface.

Although Xi works very well, it is not without its limitations. Here are some of them:

For my new effort I put together a set  of "wants":

How Do You Pronounce Xideco?

Xideco is pronounced like Zydeco. Zydeco is a form of  Louisiana Cajun music.
What can I say? Whenever I hear Zydeco music, it makes me smile - take a listen.

What does the Xi-d-eco acronym stand for?

d = Distributable
Having the ability to cooperatively execute Xideco software components residing on a single computer as well as on multiple computers.

eco
Eco-system. Suggests that the design should allow easy growth and be a living and extensible system.

Getting from Xi To Xideco

So, What is ZeroMQ ?

From the ZeroMQ guide, here is a description of ZeroMQ in "a hundred words".

ZeroMQ (also known as ØMQ, 0MQ, or zmq) looks like an embeddable networking library but acts like a concurrency framework. It gives you sockets that carry atomic messages across various transports like in-process, inter-process, TCP, and multicast. You can connect sockets N-to-N with patterns like fan-out, pub-sub, task distribution, and request-reply. It's fast enough to be the fabric for clustered products. Its asynchronous I/O model gives you scalable multicore applications, built as asynchronous message-processing tasks. It has a score of language APIs and runs on most operating systems. ZeroMQ is from iMatix and is LGPLv3 open source.

Things that attracted me to ZeroMQ:
Xideco uses PyZMQ,  a Python binding API for ZeroMQ. Want to learn more about PyZMQ? Check out the PyZMQ tutorial.

A JavaScript binding was also employed for the Node.js Bridge described below.

And What is MessagePack ?

MessagePack is a language-neutral, platform-neutral, extensible mechanism for serializing data. To quote the Message Pack web site, "It's like JSON, but fast and small." Message Pack makes message creation and parsing easy and natural.

MessagePack was selected since it does not require schema definitions to describe and create messages. Xideco messages are short and the JSON like format  seemed to be a natural fit.

It too, like ZeroMQ, has bindings for many computer languages.

Here are the goals for the proof of concept system:

For the proof of concept,  Arduino boards were used.  Subsequent releases will provide Xideco "bridges" for other board types (Raspberry Pi, BeagleBone Black, etc.) and other user interfaces (Blockly, tkinter, etc.). No matter what the microcontroller or user interface, the Xideco messaging protocol stays consistent so adding new components does not affect existing components. To create a new component, the component is coded against the existing messaging protocol or new protocol messages are added as needed. Changes are made at the edges of the system and not at its internals. 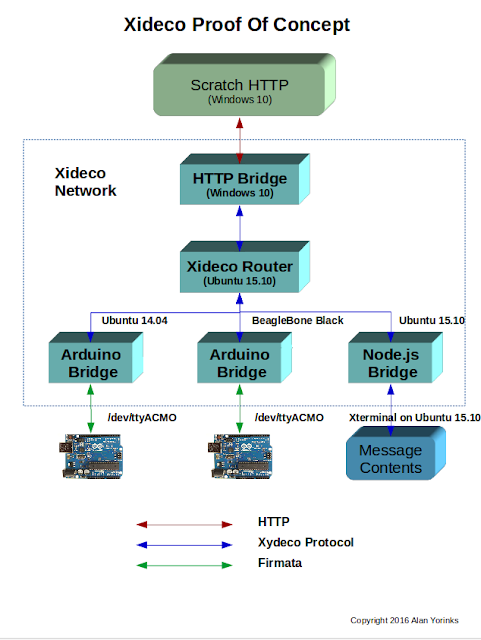 The drawing above depicts the Xideco Software Components used in the proof of concept test bed. The Xideco system was distributed across 4 computers running simultaneously:


Functionality  is distributed as follows:


The component distribution used for the test bed was picked at random. Xideco software components may be freely distributed at the user's discretion. The components can all be running on a single computer, or across multiple computers as shown in the test bed above, without any change to configuration files. You can put any component on any computer regardless of operating system.

In addition to the default English language extension blocks, blocks for the following languages are included with the Xideco package.

Here is a screen shot of Scratch with the English language custom blocks loaded. 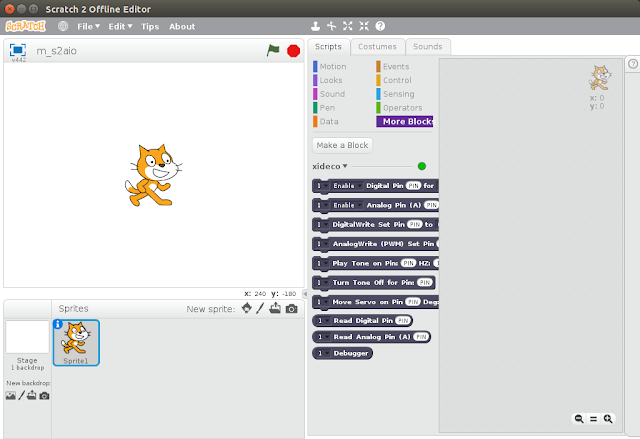 And here is a screen shot of the Scratch test scripts used in verifying the test bed. 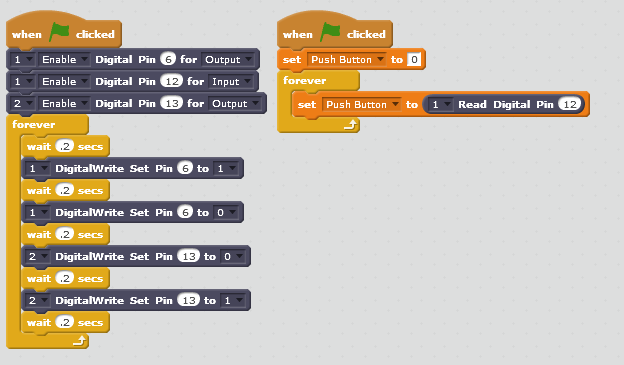 The HTTP bridge provides protocol translation to and from HTTP and the Xideco messaging protocol. The test bed uses a single instance of the HTTP Bridge that communicates directly with Scratch.

When translating an incoming HTTP message, the HTTP bridge creates a multi-part ZeroMQ message. The first part is the "message topic" or envelope (other components can choose to "subscribe" to receive all messages of that topic), and the second part is the payload of the command containing details such as pin number, and other relevant parameters. Forming the multi-part messages in the HTTP Bridge allows for direct publishing of these messages by the Xideco Router.  The router simply publishes the messages without modification.


The router is responsible for distributing messages originating both from Scratch (via the HTTP Bridge) and data updates received from the Arduino Bridges. Additional bridges may be dynamically added to the network without the need for network configuration (configuration is built into the bridge components) and without disrupting current system operations.

There is a single Xideco Router instance in the test bed.

The router distributes messages to the Arduino and other Bridges by using ZeroMQ PUB sockets. In turn the Bridges subscribe to the specific messages they are interested in.

To receive  data updates from the Arduino Bridges, the router subscribes to receive those messages and then forwards the messages upstream to the HTTP Bridge. The bridge translates the Xideco protocol messages back into HTTP and sends them to the Scratch editor for processing.

The Arduino bridge translates Xideco Protocol messages to and from the Firmata Protocol.
Each Arduino board has its own associated Arduino Bridge.

The Arduino Bridge creates a ZeroMQ SUB socket to listen for all messages of interest.

Arduino data updates, as well as error message notifications, are published by the Arduino Bridge using a ZeroMQ PUB socket. The router subscribes to receive these messages from all connected Arduino Bridges.

For the test bed, there are 2 Arduino Bridge instances. One for the Uno and the other for the Leonardo.

The node.js Bridge was created in order to demonstrate just how easy it is develop a plug-in,  non-Python component for Xideco. This bridge is invoked like any other node.js program. It will attach itself to Xideco and becomes part of the Xideco network.

Here is the JavaScript code for the node.js bridge:

To further demonstrate just how easy it is to add functionality to an existing Xideco system, check out this tutorial on the Xideco Twitter Bridge. This bridge let's you send out Tweets directly from a Scratch command block.

Summing It All Up

This is just the beginning for Xideco. I am hoping to add support for many more microcontrollers and applications in the future.

I invite you to try it out and add and then share your own module.

If you have any comments, questions or suggestion, please feel free to share them.

So Where Do You Get Xideco?

You can find the Xideco code here and with instructions on how to install here.

And when you use it, I hope it makes you smile.